After launching the A10, A20, A30, A40, and A50, Samsung has launched Galaxy A70. It has a Snapdragon 675 chipset, 6.7-inch super AMOLED large display and 4,500 mAh large battery and many more. Samsung Galaxy A70 has a unique design and unique features which looks great and similar to a previous release Galaxy  A50.

It has a glass stick black plate with 3D design so it looks beautiful and feels like a premium. Samsung Galaxy A70 comes in three different colors and they are White, Blue and Black. Samsung brought in display ultrasonic fingerprint scanner to this Galaxy A70 and also face unlock feature that is pretty accurate.
At the back side of Samsung Galaxy A70, you get the triple camera set up which includes the main camera, ultrawide and depth sensor. 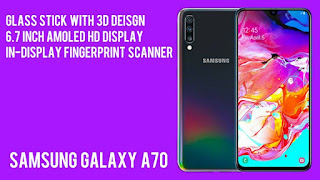 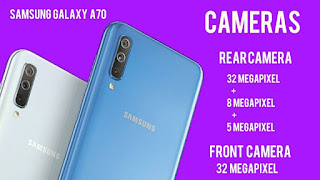 In Samsung, Galaxy A70, you get the triple camera set up which includes 32-megapixel primary camera with f/1.7 aperture an 8-megapixel ultra-wide-angle camera and 5-megapixel depth camera. The camera supports slow-motion video recording and screen optimizer. It has a 32-megapixel selfie camera.

Samsung Galaxy A70 comes with 4,500 mAh non-removable battery capacity. It supports 25W fast charger over USB Type-C. It can take 1 to 2 hours for fully charged and will remain that charge more than 17 hours.

Galaxy A70 has an octa-core Snapdragon 675 chipset with Adreno 612 GPU. You can play a huge game such as PUBG Mobile, Asphalt, in a high frame rate without lag. It has a 6GB of RAM with 128GB of storage and can expandable up to 512GB via microSD.
Samsung Galaxy A70 based on Android 9.0 pie which is the latest Android version. 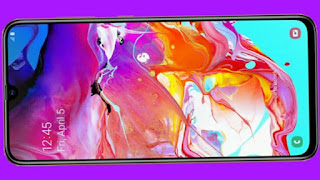 Shortcut Review of Samsung Galaxy A70